Back when I was doing some work for Adventurer's Vault I got a copy of the D&D 4E style guide. I thought some of the ideas for the new dwarves were interesting, so when it came time for my group to try 4E my character was a female dwarf fighter, who I sketched during a couple of sessions:

Some time later I was talking with William O'Connor (Website Blog Dracopedia) who had done a lot of concept work for 4E. He told me they had made a concerted effort to make female dwarves interesting to players -- research had shown they were played even less than monster races.

So I guess their new marketing targeted me. I'm always surprised when that happens.
Posted by Drew Baker at 4:00 PM 7 comments:

Dragon*Con in Atlanta is this weekend. I'll be attending, and will have work in the art show. If anyone wants to get together, drop me an email. This will be my first Dragon*Con, and I'll be glad for an orientation.

I have a few more robot sketches, some of which are more giant than others. These were done pretty quickly on the heels of the last batch -- I was just slow sharing them. 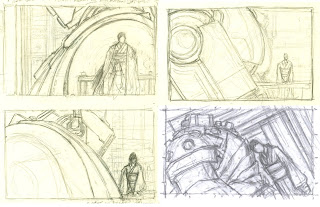