Yep, I've been traveling. Whilst in the Seattle area not only did I get to have a fine time at the Tacoma Kotei, I also got to catch up with friends I see all too rarely. Special thanks to (in roughly chronological order) Franz and Imelda, Jon, Mary, Jeremy, Richard, Greg, Leon, Drew, Dierdre and Raven. Obviously, I've left people out. Also obviously, it's because I'm a jerk.

Shortly after my Seattle jaunt I was off to LunaCon. It was my first real convention experience without a table to sit behind. I discovered things like panels, fresh air, lunch, people to talk with, and how an art show check in/out system works. (Also that if you don't follow the "whole dollars only" pricing rules you may get whapped on the head with a stack of papers. Repeatedly.) It was also great to see/meet Eric, Matt, Dan, Marc, Kelly, Hillary, Bill, Joe, Kris, Michael, Dan, Bob, Sue, Patricia, and... so many other people who also have names. I made no promises, right?

And look what my Golden Wyrm painting came back with! A hard worker, that one. 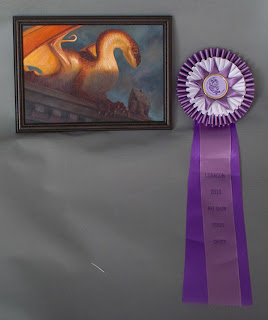 I didn't mean to miss two weeks in a row. Sorry. If it makes you feel any better I did do some vaguely horse-shaped scribbles in my sketchbook, they just didn't make it up for one reason or another.

Here are a couple of pieces from my project for CrossCut Games. 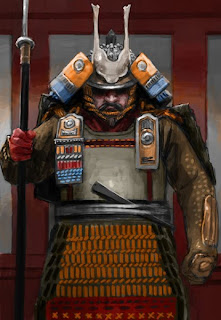 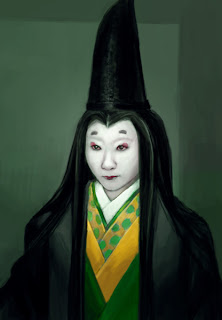 I've also posted a new L5R piece over on DeviantArt. I'll bend my "sans NDA" rule a bit by mentioning it here.
Posted by Drew Baker at 9:46 PM No comments: